Alex Towey began following the Martial Way when he was only 4 years old. He started his training under the teachings and instruction of Sensei Bill Severs in Palm Springs, California. He went as far as his advanced brown belt in Sensei Sever's school and unfortunately had to move. Alex received his black belt at the age of 11 and then his 2nd degree or "dan" at the age of 16, his 3rd Dan at the age of 23, and finally, his 4th Dan at the age of 30. Alex has been to national and international competitions and has been teaching Martial Arts with his father since the year 1997 when they opened up their first school in Melba Bishop Community Center in 1997. He enjoys living the Martial Way and says " I cannot live one day without being on this joyful path which has made me a better person mentally, physically, and spiritually." He currently trains and teaches students of all ages at his dojo in Fallbrook, California. 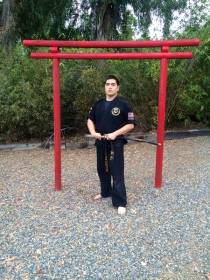 Sensei Paul Soto began his Martial Arts journey in the year 2000 at the John Landes Community Center in Vista, California under the guidance of Sensei Tim Towey. He quickly earned his black belt in 2004 after training extensively with the Toweys. Paul has competed both nationally and internationally in tournaments and has coached students who have won national and international competitions. Paul currently trains with TAMA in Fallbrook California as an assistant instructor and senior member.

Recommend this page on:

You have installed an adblocker. This Web App can only be displayed and edited correctly when the adblocker is disabled.