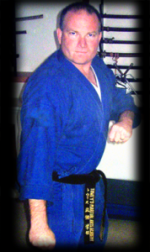 Master Tim Towey began his martial arts journey nearly thirty years ago beginning with judo. He grew up in Hawaii, and being a white kid on the north shore in 70’s made him quite the adversary to the locals, and was forced to learn how to defend himself. Ever since he was young, Master Towey has been learning and teaching martial arts.

Tim continued to wrestle in high school and a college, so that he may further his martial arts skills with ground technique as well as a conditioning coaching. He trained under famous wrestling coach (Wrestling Rhinos) Mike Hess. Tim also trained under Wrestling coach Steve Anderson of the WSWCA Hall of Fame.

Master Towey continues to contribute to the Martial Arts and his community. He first started teaching martial arts in 1996 in Oceanside, CA at a community center. There his student population grew and grew as more people came to learn. Tim has always believed in helping the community and the best way through his eyes are to do so through community centers and helping those who are really in need.

Tim has since then opened up 4 more schools including 2 more in Vista, CA, and his personal dojo to teach martial arts in Fallbrook, CA.  Tim has now made 15+ black belts and has placed them in community centers so that they can take after him and help those in need. He currently trains with friends, students, and family in the Northern San Diego area. Teaching Martial Arts in Fallbrook is where he does most of his training now days and Martial Arts in Fallbrook seems to be growing in lieu of moving his school to the area. Tim also teaches self-defense in Fallbrook as well as Oceanside too.

1.)    1st Dan by the International Federation of Ju-Jutsuans

2.)    Member of the Mudansha Division of the Budoshin Ju-Jitsu Yudanshakai

3.)    2nd Dan of the United Martial Artists Association in Moo Duk Kwan and Tae Kwon Do.

5.)    SanDan in Shotokan Karate Do by the Christian Karate Federation of America.

13.) Moniteur under the Federazione Italiana Scherma(F.I.S).

21.) PhD in Martial Science from International University of San Diego

Recommend this page on:

You have installed an adblocker. This Web App can only be displayed and edited correctly when the adblocker is disabled.